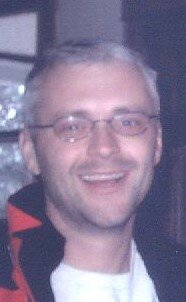 Please share a memory of Michael to include in a keepsake book for family and friends.
View Tribute Book
Michael W. McGrath, 47, passed away Wednesday, Sept. 28, 2022, at Niagara Hospice in Lockport after a long battle with multiple sclerosis. He was born April 9, 1975, at Mount St. Mary’s Hospital in Lewiston, NY, the son of William J. and Patricia Ann McGrath of Youngstown. He is also survived by his sister, Mary McGrath of Minneapolis, MN. Michael graduated from Lewiston-Porter Central School in 1993. During the summer of 1991, he was a seasonal worker at Old Fort Niagara and an interpreter speaking to visitors during tours of the historic fort. He was the only person in the French castle one evening dressed in his British uniform when sparks from a fireplace used for baking demonstrations overheated the chimney. Wind from the east, according to firefighters, ignited a fire on the roof of the building. Michael discovered the fire, called emergency workers, and searched the building for others who might still be in there. The castle escaped major damage and there were no injuries. He was commended for his actions in a letter from the Old Fort Niagara Association Board of Directors a month later. After high school, Michael relocated to Minneapolis to continue his education and eventually became a marketing specialist in the Twin Cities area. He returned to Western New York in 2014 to deal with his multiple sclerosis. Michael was a Buffalo Bills and Buffalo Sabres fan and liked going to Big Ten college basketball games at the University of Minnesota. He enjoyed fishing, especially for muskies, and was involved in the local chapter of Muskies, Inc. He also had a knack for cooking. He had a quick wit, made friends easily and enjoyed making people laugh. There will be no prior visitation. A Mass of Christian Burial will be offered at St. Bernard’s Roman Catholic Church, Hinman Street, Youngstown, NY on TUESDAY October 4th at 11:00 AM. Memorial offerings may be made to Old Fort Niagara, P.O. Box 169, Youngstown, NY 14174 or online at oldfortniagara.org. Arrangements by Hardison Funeral Home. Please visit www.hardisonfuneralhomes.com
To send flowers to the family or plant a tree in memory of Michael McGrath, please visit Tribute Store
Print
Tuesday
4
October