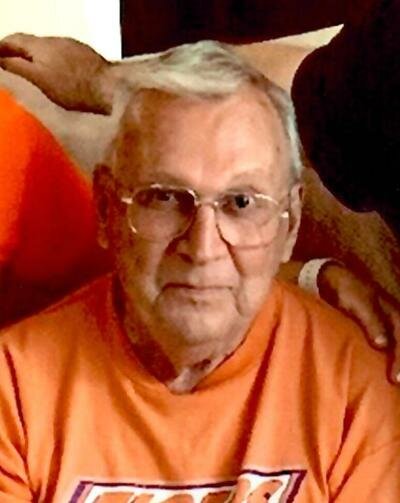 Please share a memory of Edward to include in a keepsake book for family and friends.
View Tribute Book
Edward Frederick “Ed” Schrader, Jr., age 86, of Anderson, SC, devoted husband to Sheila Merrick Schrader for 25 years, passed away Sunday, December 19, 2021, at AnMed Health Medical Center. Born May 25, 1935, in Dunkirk, NY, he was the son of the late Edward F. Schrader, Sr. and Martha Willard Schrader. Ed proudly served his country in the United States Navy serving aboard the battleship USS New Jersey. After earning his bachelor’s degree, Ed worked as a boiler engineer for a multitude of companies throughout his professional career. These companies included Stauffer Chemicals, Spaulding Fiber, and St. Mary’s Hospital in Lewiston, NY. He retired to Anderson, SC, in 1998, was an avid golfer at Brookstone Meadows Golf Course, and was a member of Zion United Methodist Church. In addition to his loving wife, Sheila, he is survived by his children, Joy Jordan, Rick Schrader, Brian Schrader, Scott Schrader, and Kristen Schrader; seven grandchildren; and three great-grandchildren. In addition to his parents, he was preceded in death by a sister, Barbara Zahno. A memorial service will be held at a later date. In lieu of flowers, memorial contributions may be made to Zion United Methodist Church, 5708 Hwy. 187 North, Anderson, SC 29625, or to Ransomville Fire Company, 2521 Youngstown Lockport Rd, Ransomville, NY 14131. Messages of condolence may be left for the family by visiting The McDougald Funeral Home website, WWW.MCDOUGALDFUNERALHOME.COM.
To plant a beautiful memorial tree in memory of Edward Schrader, please visit our Tree Store

Look inside to read what others have shared
Family and friends are coming together online to create a special keepsake. Every memory left on the online obituary will be automatically included in this book.
View Tribute Book
Services for Edward Schrader
There are no events scheduled. You can still show your support by planting a tree in memory of Edward Schrader.
Plant a tree in memory of Edward
Share A Memory
Plant a Tree