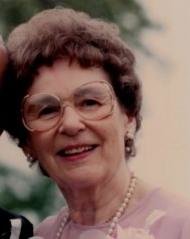 Irene Korzekwa age 100, of Wheatfield, formerly of Lewiston entered rest on Tuesday July 23, 2019. She was born on May 16, 1919 in Stary Sacz, Poland to her late parents. After she finished business school, the war broke out and her mother and grandfather were sent to Siberia. Irene found work as a bookkeeper in her uncles’ factory in Krakow, but then she was captured and sent to work on a German farm. After the war, she worked for the Red Cross in Italy. She was finally reunited with her mother in 1948 in London, England, where she worked as a seamstress.  She met Tadeusz, who fought in the Warsaw uprising, and was studying metallurgical engineering in London. They got married in 1950 and were married for 43 years. They immigrated to Canada in 1952 where she worked as a bank teller, and then on to Lewiston, New York in 1967. Irene served as treasurer, vice-president and president of the Lewiston AARP, and she volunteered at Fairchild Manor, for almost 20 years with the Red Cross, and in the OT department at the Veterans Hospital where she taught weaving. She was very proud of her physician daughter and 3 grandsons. Her family would like to thank the wonderful staff of Brookdale Memory Care and Elderwood Assisted Living for their loving care.

Irene is survived by her daughter Marilyn, son-in-law, Peter, and grandsons Roman, Mykola, and Michael. She is predeceased by her husband Tadeusz.

Family and friends may call on THURSDAY from 7-9 PM at the HARDISON FUNERAL HOMES INC. N.Fourth and Ridge Sts. Lewiston, NY. A Mass of Christian Burial will also be held on FRIDAY (July 26) at 11:00 AM in St. Peter’s RC Church 600 Center St. Lewiston, NY 14092.

Memorial donations in lieu of flowers may be made to the Red Cross at redcross.org or PO Box 37839 Boone, IA 5003-0839. Please visit www.hardisonfuneralhomes.com for online registry.

To send flowers to the family or plant a tree in memory of Irene Korzekwa, please visit Tribute Store
Print
Thursday
25
July