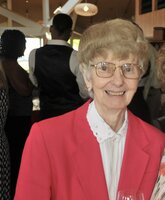 Irene McHugh, beloved friend of Shirley O’Donnell, died on August 16th, 2021. She is also survived by her devoted sister Catherine Daly, her nephews Martin Daly (Creig Whitney), Robert Daly (Kelly) and her niece Catherine M. Daly, as well as grand-nephews and niece, numerous friends, and other relatives. She was preceded in death by her parents, James Robert and Catherine McHugh. Irene was born in the Bronx on August 26, 1931. After graduating from St. Jean’s High School, Irene entered the sisters of the Presentation of the Blessed Virgin Mary of Newburgh. Over the next 25 years. She was a teacher and counselor in various schools in the Archdiocese of New York, including 11 years at St. Michael Academy. After relocating to Western New York, Irene taught first at Attica Correctional Facility and finished her career in the Department of Corrections as a counselor at Wyoming Medium Security Facility. Irene was an avid reader and sports fan, particularly of the New York Giants and Texas A & M football teams. She loved nature and animals, but most of all, Irene loved people. With a ready smile and friendly greeting, she spread happiness to all whom she encountered. With her passing, Irene leaves a void for them to fill. Visitation will be held at the Hardison Funeral Homes Inc. N. Fourth and Ridge Streets in Lewiston on Thursday, August 19th from 3-7 p.m. Mass of Christian Burial will be held at St Peter’s RC Church in Lewiston on Friday, August 20th at 10:00 a.m. Burial will be in North Ridge Cemetery. In lieu of flowers, donations in Irene’s memory can be made to Hospice of Buffalo. Please visit www.hardisonfuneralhomes.com