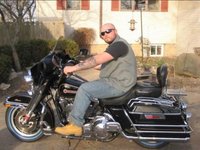 Scott A. Tracey “JR” , (34) made his last undignified and largely irreverent gesture on May 26th. He flew home, doing exactly what he wanted. Scott was blessed with two beautiful, funny & smart daughters; Jade (17) & Alyssa (4). On Tuesday September 2nd, God broke the mold that day & Scott was born to James and Penny (Corrinne) Tracey. Being the younger brother to Lindsay (Tracey), was a dubious task, but Scott was never one to back down from a challenge and dutifully practiced perfecting the most obnoxious pranks & a somewhat inappropriate, but always entertaining sense of humor that you had ever met. Scott was a talented Iron Worker (Local #9) and successful entrepreneur. He was the first one people would call for help, because they knew he always would. His heart was actually bigger than his (mouth) and to the people that he let get to know him, they are all missing their “son” & “brother”. Scott was associated with a philanthropic motorcycle club, a local firehall & various social scenes throughout WNY. One of Scott’s superpowers was his ability to make people laugh. The natural & hysterical comedy routine he and his friends would perform would have you either in tears or soiled britches. He was also a talented fabricator of both metal and stories, he could fix anything. Scott was also the creator of the weirdest, yet most delicious sandwiches and a true artist with meat on the grill. Scott’s family wishes to share memories and stories with you all at a celebration of life happening on AUGUST 1st from 1-4 PM at Porter On The Lake Park Lake Rd. Youngstown. They are most appreciative of the respect people have had for their time and space they desperately need to heal privately. To share a memory of Scott or donations for his memorial: @ScottishRider via Venmo. Checks payable to Corrinne Tracey 1579 Youngstown-Wilson Rd Youngstown, NY 14174