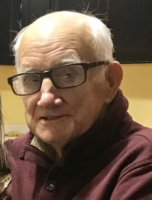 Robert Kirkpatrick, age 86, of Niagara Falls husband of the late Della “Joanne” Reid Kirkpatrick died Thursday, August 22, 2019 at home in Niagara Falls with his loving family at his bedside.  Robert was born June 8, 1933 in Patton, PA. He is the son of the late Gordon and the late Bertha Bailey Kirkpatrick.

Bob served in the U.S Army from 1953 to 1955.  He retired in 1995 from Carbon Graphite after 20 years and prior to that had worked 20 years at Stauffer Chemical as an electrician. Bob was an avid hunter, fisherman and enjoyed spending time with his family at their camp in Franklinville and loved his beloved dog Abbey and grand-dog DeJae.

A memorial service will be held MONDAY (August 26) at 11:00 AM at the HARDISON FUNERAL HOMES INC., 3648 Ransomville Road, Ransomville, NY with Rev. Ronald Maines  officiating.  Burial will be in North Ridge Cemetery with military honors at a later date.